The Foster family emigrated from Yorkshire, England in 1851, a year later Thomas was born. He grew up with his extended family in the small community of Leaskdale, Ontario, here his family farmed and ran the local hotel. Completing his school studies, Thomas moved to Toronto and served a butcher’s apprenticeship with his half brothers. He learnt well and managed to save, so that on completion of his apprenticeship he opened his own butcher’s business in the Queen/Berkeley St area. Thomas ran his shop well and with frugal management he started investing in real estate.
By 1892 he had sold his butcher business and now a wealthy man entered politics. About this time,1893 he married Elizabeth MacCauley. One year later Elizabeth gave birth to their first and only child Ruby. She was the ‘apple of her parents’ eyes’ but sadly she was to die before her 10th birthday.
Thomas served over 25 years in politics, primarily municipal with the City of Toronto. In 1920, during his one and only term in Ottawa, his wife Elizabeth died. Serving largely as Controller in Toronto he became Mayor for the 1925-1927 term. In the 1928 election he was defeated and now well into his 70’s he stepped away from politics.
Retired and a man of some wealth he embarked on a world tour. His tour took him to the Middle and Far East and it was on a visit to the Tay Mahal in Agra that he was overwhelmed by the beauty of the building. Built for Shah Johan in memory of his third wife, this inspired Thomas to think of a memorial to his beloved wife Elizabeth and daughter Ruby.
Upon his return to Toronto, Thomas engaged the services of the renowned architects Craig & Madill, instructing them to design a memorial using the influence of the Taj Mahal. Thomas already owned an acre of land in Uxbridge, adjoining the Zion (now the Foster) Cemetery where his parents were buried. Situated on a hill visible from all directions. Using the Byzantine influence from the Taj Mahal, Craig & Madill produced a splendid design.
Construction began in 1935. Skilled craftsmen were required to work on the masonry and mosaics, many of whom were from the Italian immigrant community in Toronto. The construction also injected income into the local economy.
The exterior of the building is constructed in limestone topped with a copper dome, which is surrounded by four half domes. Bronze doors open into the resplendent interior of the rich varieties of marble, terrazzo and mosaic. The stone capitals were carved by skilled and experiences sculptors.Craig & Madill engaged the services of Yvonne Williams to design the stained-glass windows. After studying in New York, this was one of Ms. Williams first commissions, she was to go on to become a renowned Canadian stained-glass artist. Thomas had been frugal and prudent during his lifetime but now expense was spared on the memorial. Originally budgeted at $100,000, the final cost was $250,000.
The building was dedicated in 1936 and Ruby and Elizabeth were re-interred in the Memorial, their final resting place.
Thomas live on into his nineties and passed away in 1945, when he was interred alongside his wife and daughter. From settler’s son to successful businessman and politician. He left an estate of $1.4 million.
After small family bequests and $80,000 for the maintenance of the building the balance of his estate was charities and funds both large and small. By far the largest was a bequest to Cancer Research.
The building and its history is the subject of the book Jewel on the Hill – The Story of Ontario’s Thomas Foster Memorial by Conrad Boyce is available through this website. 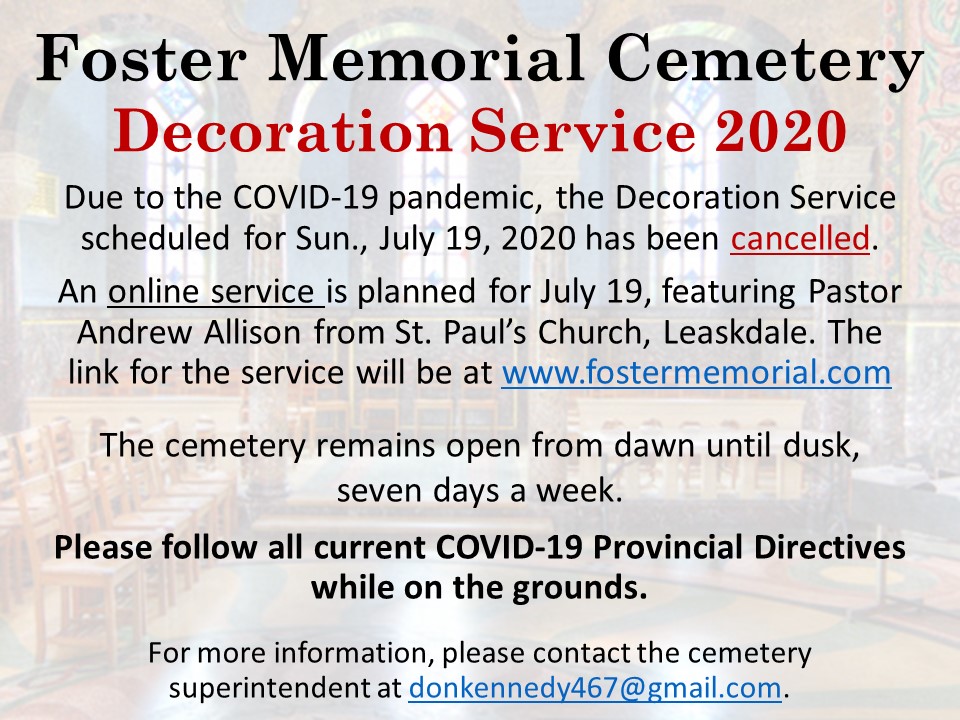 The Foster Memorial Will Open For the Season On May 1st

(Donation at the door) >
Each Friday there is a different entertainer, classical, acoustic guitar, alternative folk, popular, Broadway, musicals etc

Check out "Program" for listing of entertainers

On Nov. 15th Sunday 1:30
Ladies of the Foster reading Charles Dickens “A Christmas Carol”
With seasonal sing- a long

Meditations are offered for Women and Men
Relax with the Crystal sound meditation with Quartz Bowls and Crystal harp
Call for Info & to register 905-640-3966
bnortheast@powergate.ca

Thomas Foster Memorial
More than a Mausoleum The Memorial stands as a testament to the triumphs and tragedies of Thomas Foster a local boy who went to the city and found his fortune. He was an MP and a Mayor of Toronto and left several legacies.It is an unique artistic treasure hidden in the rural Uxbridge countryside. The Memorial is inspired by the Taj Mahal mixed with Byzantine Architecture, with solid bronze doors, stain glass windows hand painted and fired. The floors are rich coloured terrazzo and marble mosaics wrought in symbolic designs fashioned by some of the finest artisans of the time.

For hotels nearby, check with HotelsCombined